It is 1877 and a Mrs. Sheehy of Roxburgh is the first person to have a conversation on a private line using the new-fangled contraption called a talking telegraph.

Two years later New Zealand’s first telephone office opened in Port Chalmers and another two years went by till the first phone exchange opened in Christchurch in 1881. Auckland then followed suit with 10 subscribers.

The first telephone system opened in Blenheim in 1887 with 33 subscribers and it was not until 1920 that the first automatic exchange opened.

By 1930 all the main centres had been connected and toll calls between cities and towns were possible. Gossip never had it better.

In 1931 we connected to Britain [at £3.15sh] and 312 calls were made that first year. Locally in the years to WWII it wasn’t that easy to acquire a phone line and party lines were the norm if you were lucky enough to be someone given priority. During the war years copper for the lines had other uses.

You may remember the kind of phones then, fixed to a wall and you had to stand to speak into the receiver. Of course, if you were the one with the phone your neighbours came to use it too, and some walked a long way to your house for the privilege.

Gradually the old party line and operator based system gave way to subscriber dialling, STD technology came in and improved so that 1970 The Post Office was transmitting computer data across its network. 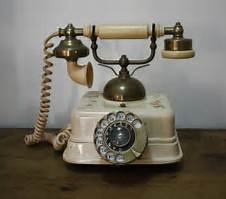 By now wires criss-crossed the land and the innovators began to look at satellites for linking continents leading to the first satellite station opening at Warkworth in 1971, which was also the year we reached the 1 million subscribers mark.

By 1987 the NZ Post Office was restructured and readied for sale and given a new lease of life as “Telecom”, and totally deregulated in 1988, by the way as the first in the world to do so.

Now we are getting into a time-line more familiar to us all. Telecom sold to Bell Atlantic for $4.25billion and competitors started to appear. You may remember Clear Communications, followed by Bell South with GSM digital service. They in turn were taken over by Vodafone in 1998 and Clear became 100% owned by British Telecom.

It might surprise you to learn that in 1991 there were 1193 Kiwis connected to the internet and within 2 years that had rocketed to between 10000 and 15000, one of the fastest growth spurts in the world.

It got really interesting now for Australian Austar set up Saturn Communication by buying the former Kiwi Cable company [formed in 1994] and it operated on the Kapiti Coast and expanded into Wellington and Christchurch with cable TV, phone and internet services.

Telecom insisted the ‘broadband’ ISDN should be available to all New Zealand homes and businesses by 1995, but it never happened. By 1996 23% of New Zealanders have computers at home and the Ministry of Commerce estimates that about 60000 to 100000 Kiwis are online.

In 1999 Telstra which was the dominant carrier in Australia shocked the market by entering into a partnership with Saturn and promising broadband network for 65% of homes and 80% of businesses. Fibre loops would be laid in the main business centres, wireless links to outlying regions and international undersea cable with 120Gbit/sec capacity.

Finally, there was a formidable competitor to Telecom, but Telecom then decided to lay its own hybrid-fibre coaxial cable between 1995-7 and blew close to $200 million before aborting its project.

Telstra meanwhile was waiting to make a still grander move because Telecom had moved into Australia and bought AAPT. It took Telecom 2 years of trying to integrate Telecom and AAPT but without the desired result of ramping up the competition in Australia so it all had to be scaled back and hundreds of staff lost their jobs.

Telstra now bought Clear from British Telecom creating what was to known as TelstraClear. The Southern Cross undersea cable went live in 2000.

At this stage telecommunications are all about the internet and there are now 100 million cell phone subscribers worldwide a move that started with the first portable cell phone call made in the USA on 1 January, 1973.

There are now 30-odd providers of phone/internet services in New Zealand.  Telstra was bought out by Vodafone and Telecom has had yet another name change to Spark NZ. The competition is intense in the industry and we have benefitted from better pricing and faster broadband connection.

Fibre optic cable is gradually being laid in Kapiti  to provide yet faster connections for data transmissions, so if you are in to streaming content or gaming you’ll be pleased it is coming.

Phones are almost a side issue, they are small computers now and phoning is the least of their use. Really quite an amazing journey from the start of telecommunications to now in just over a hundred years.