This is for TV addicts, the opportunity to increase your choice of selections of programmes available to fill your idle moments when the phone is quiet, the tablet out of reach and the emails and the updates to facebook on the computer have been dealt with.

You may have heard or read about Chromecast, Airtame or Apple TV, gadgets that can be added to your TV to allow you to stream movies or episodes made for TV and show them on your big screen rather than on the computer or laptop; useful if others would like to see the chosen movie with you.

But what are these gadgets and what do they do?

They mirror the display of whatever is on your screen of your computer/laptop/tablet or even smartphone on your TV screen, and have somewhat different attributes. The first  thing to get clear is that you can do the same thing with wires, that is you can connect your computer direct to your TV via a socalled HDMI cable, given that your TV has an HDMI connector, and if you bought your new flat screen TV in the last 5 to 10 years there is a good chance that it is equipped with such a port, and of course that your laptop or PC has one as well.

If, like me, you use a desktop PC of a goodly size you may not wish to lug it up to the TV for connecting, but may still wish to view the streamed programme on a big screen, then technology comes to our aid with the wireless connectors or boxes.

The Chromecast dongle plugs into the HDMI port on your TV and you need to have WiFi available in your household. Be aware that if you intend to screen from your laptop or other battery operated device the drain on battery is high because the Chromecast device streams from the WiFi, not direct from the internet. So have your computer connected to a power outlet when streaming to the TV. This by the way applies equally to the Airtame dongle.

It would nice if that was all that was required, but there are some things they don’t tell you. For Chromecast to work you need to have the Chrome browser installed on your PC and use that for selecting the programme or photos or facebook photos you wish to show. Screen mirroring is supported for phones running Android 4.4.2 or later [Android 5.0 and upwards are better optimized]. Now go the Google Play store for the Official Chromecast App and install. For details of how to do this see your 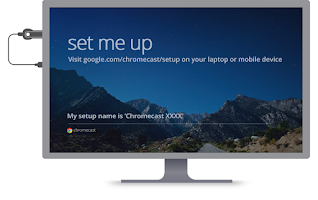 friendly Kapiti SeniorNet ‘How do I..?’ workshops. And this applies to both Chromecast and to Airtame: both require power connection, either via USB or via a powerpoint plug supplied with the unit. If choosing the USB connection available on your TV set close to the HDMI port be careful to plug in to the port named USB, not the one named ‘Service’.

So much the same applies to the use of Airtame. Install the software, plug in the Airtame dongle and the power supply, either USB or plug in to powerpoint. The difference here is that you don’t have to have a Chrome browser, you can use Internet Explorer or any other preferred browser. This unit can actually do  rather more than the Chromecast can, and is largely aimed at business for presentations and simultaneous sharing of information as well as being able to do the sort of things you might wish to do in the way of streaming or photo sharing etc.

The third one mentioned is the Apple TV. Not a TV at all but a set top box and a remote controller. On the back, there’s the obligatory HDMI port, along with Ethernet, USB-C and power ports. Unfortunately, you’re out of luck if you’re still relying on optical audio cables; the Apple TV relies entirely on HDMI for audio.

This device belong to the set top category  along with Roku, Google and Amazon boxes, but the apple box is somewhat dearer than the sticks. It does however provide entertainment content like Netflix, iTunes, kids’ stuff, music, weather and educational material and connects to the internet directly. Subscribing does come at a cost similar to other providers’ streaming services.

If you have a new TV with inbuilt connection to the internet then you don’t need these gadgets to further swallow your time, enough will be spent on making the decisions on what to watch, but for avid TV fans the ability to stream to the TV from your computer or phone does add a certain selectivity to your watching plans.

It is recommended that if the idea of streaming to your TV appeals to you that Kapiti SeniorNet is your first port of call for a fuller coverage of what is involved, especially if you already subscribe to one of the several streaming services like Lightbox [12.99/mth], Neon [$20/mth], Quickflix [12.99/mth], Netflix [9.99-15.99/mth] and free services like 3NOW, TVNZ onDemand.

Other options for the binge watcher are SkyTV [particularly if sport rates high on your agenda], Freeview [Freeview Plus comes with a set top box, not free], Igloo, Netflix US through internet provider offering Global Mode which would also get you BBC iPlayer or Hulu. Some of these come at a cost as do Video Eazy, Apple, or Google Play [similar to iTunes].

Lots of choices, but the two dongles lets you decide what you want to watch as long as your computer is connecting to your own WiFi, and at no extra cost other than the cost of the selected movie you are streaming down. What you are ultimately paying for when using other systems is quality, more high definition though again it pays to check each offering so you know what to expect.

If your appetite has been wetted, happy viewing.