This is the time of the year when the hair on the head of the Techies quivers with anticipation for all the new cool gadgets to be presented this week in Germany, in Berlin to be exact, at the  IFA exhibition there. There is quite a bit of history attached to the show for it began back in 1924 when it was all about radio, and even the name of the show IFA abbreviated from Internationale FunkAusstellung  (Funk=Radio, Ausstellung=Exhibition) has remained since then. 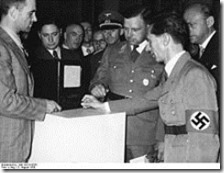 s that the early TV tubes [cathode ray tubes] were demonstrated here in 1931, and in 1933 a new ‘People’s Receiver VE301’ was being sold at the show for 76 Reichmarks, and 100,000 units were sold during the show.  This was in the lead up to the Nazi era and the design had been ordered by Joseph Goebbels.

In 1935 the first practical audio tape recorder [the Magnetophon] was unveiled by AEG, a company better known to us today for their whiteware. By 1939 the first TV with a black and white screen around 19x22cm and at an affordable price was shown, but production came to a stop with the start of WWII.

shown at the exhibition in 1963 and ever since the latest inventions and gadgets have featured. Each year accredited journalists from some 78 countries flock to Berlin for the latest on the latest, but the success of this show also has to do with it being open to the public [abt. $25 entry] with more than 200,000 people expected to look around the enormous exhibition halls to see what their favourite brand has come up with.

You can imagine how difficult it is for anyone trying to work out what their next upgrade is going to be, is it Acer, Panasonic, Lenovo, HP, Nokia, LG,HTC, Huawei, Alcatel, Electrolux, Samsung, or Apple or Sony or one of the multitude I haven’t mentioned?

Whether it be the home of the future one is looking for, new whiteware, audio or TV equipment, the latest gear like smartwatches, google glass, or phones, tablets or gaming gear. It will all be there with masses of videos and pictures and marketing stories.

and over the coming weeks we shall hear about all the new gadgets to make your life easier, more fun, and hopefully not more complicated!